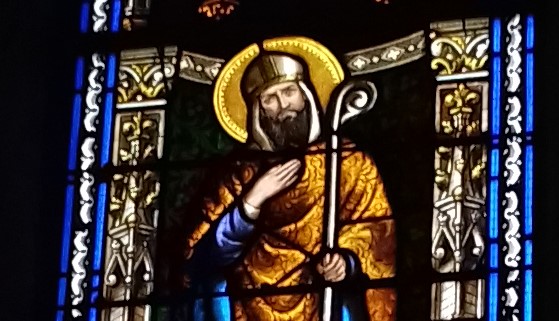 Cernay is divided into two territories: on the one hand, the valley, surrounded by the forest, and site of the former Cistercian abbey in the Vaux de Cernay; on the other hand, the plateau, a vast expanse of agricultural properties.

The village, located on the edge of the plateau, is closely settled around its historic monuments – the church and the town hall.

To visit the church, enter through the porch, also called ‘caquetoire’ or ‘chatter corner’.

On your right, you will notice the shell-shaped holy water font made of marble and sandstone.

Upon entering the church, Christians make the sign of the cross after dipping their fingers in the holy water as a reminder of their baptism

At the back of the church and located in the side aisle stands the baptismal font. The font, carved in limestone with a motif of oval cabochons along the rim,  was formerly painted..

Seating yourself next to the font, you can take in a complete view of the nave which was built in the 16th century with a combination of hollow and dressed masonry, sandstone and meulière (a local stone).

The long vaulted ceiling is clad in wood, giving it the appearance of the inverted hull of a boat.  This is the space where the faithful gather for mass and, being oriented to the east, it symbolizes a rising sun which never sets.

The massive pillars which separate the side aisle from the nave are embellished with geometric and floral motifs.

In front of you, in the choir (or chancel), is the altar where the Holy Eucharist (the Mass) is celebrated, reenacting for the faithful Jesus’ words, “Do this in memory of me”.

During each Mass, Christ’s sacrifice is renewed through the transformation (transubstantiation) of bread and wine into the body and blood of Christ.  We are also reminded of this by the 17th century Christ on the Cross on the altarpiece, as well as by the wooden Christ suspended on the second pillar which was sculptured by local artist Laurence Domenach in 1999 and inspired by a Christ on the Cross at Cluny (Côte d’Or region).

The church’s choir was converted during the 19th century into three separate altars, each with its own classical altarpiece.  A new main altar, of neogothic style with four sculptured columns, was later put forward.  In the wall on either side of the altar are two niches containing the statues of Saint Brice (to the left) and Saint Louis (to the right).  Saint Louis is shown holding Christ’s Crown of Thorns, which he brought to France from the Crusades in the Holy Land in 1238 and which was kept in the Treasure room of Notre-Dame-de-Paris until the cathedral was severely damaged by fire in 2019, at which time the Crown was transferred to the Paris city hall.

Turning left, you can see a wooden separation between the main altar area and the sacristy, where the objects and apparel used during Mass are stored.  Notice, in the ceiling at the base of the bell tower, a hole through which ropes were passed to ring the bells above.

Above the altar in this space is a statue of Saint Joseph holding both the infant Jesus and a white lily.  The stained-glass window above the statue represents Jesus of the Sacred Heart, the symbol of Divine Love where all converges and which encompasses all that exists.

Turning to the altar on the right, you see, above, a statue of the Virgin Mary.  This is the altar of the Blessed Sacrament upon which is placed the tabernacle containing the Hosts, (wafers consecrated in the celebration of the Eucharist) which are left at the end of the celebration. The Holy presence of Jesus Christ in these hosts is indicated by the small red light next to the tabernacle.

On the sculptured door of the tabernacle is a cross with two sheaths of wheat and grape vines, representing the bread and wine of the Eucharist.

The triangular pediment containing a cloud symbolizes the Christian belief in one God who is simultaneously the Father, the Son and the Holy Spirit.  The Holy Spirit is frequently represented by a white dove, as in the stained-glass window above the central altarpiece .

All of the stained-glass windows date back to the late 19th and early 20th centuries. Above the three altars at the front of the church are, from left to right: Jesus of the Sacred Heart, the Holy Trinity, the Virgin Mary, and on the south wall, Saint Joseph.

Turning to face the main entrance to the church, you can see, in the left window above the door, Saint Alexander (d. 115), one of the earliest popes, wearing a papal tiara and holding the papal triple cross. Next to him is Saint Stanislas (d.1568), a Polish Jesuit novice.

On the north wall is a window devoted to Saint Augustin (d. 430), a doctor of the Church and bishop of Hippo (North Africa).  To his right is Saint Brice (d. 444) who became the bishop of the cathedral of Tours upon the death of Saint Martin

Saint Alexander and Saint Brice remind us of the evangelization period by announcing the Holy Scriptures: that Jesus was born in Bethlehem, grew up and taught, was later condemned, crucified and resurrected on Easter Sunday.

After His resurrection, Jesus invested His disciples with the Holy Spirit, thus empowering them to found the Holy Catholic Church.

They and their successors went forth to preach: Saint Peter to Rome, Saint Irenaus to Lyon, Saint Denis (~200 A.D.) to Paris; then progressively, evangelizing all of France.

But it is Saint Martin, followed by Saint Brice, who evangelized the rural areas of France by constructing churches in the villages from as early as the 5th century.

Somewhat later, abbeys were also built, becoming the hub of intellectual and spiritual development in their respective areas, as was the case in the 12th century for the Cistercian Abbey of les Vaux de Cernay.

Its abbot, Saint Thibaud, was very devout and generous to the poor, but was also well-known for having interceded on behalf of King Saint Louis to bring about an abundant succession to the royal family.

Couples today continue to pray to Saint Thibaud, whose relics are kept here in the church, to intercede on their behalf in order to have children.

On the north wall of the nave is the 19th century wooden pulpit which rests on a simple column.

Behind the main altar, the oak prayer stalls come from the Abbey of Notre-Dame-du-Pesquié. (near Toulouse).

Across from the pulpit on the first pillar, you will find  a 13th century wooden statue of Saint Brice.

Nearby, one can faintly make out the remains of wall paintings: a chalice, and,  below, a foot, the probable remains of some very old painting of Saint John, the Evangelist.

Near the main entrance, rests the commemorative tombstone of Jean de Furet (d.1521) and his wife, Catherine de Sainte Marie (d. 1541) who face each other.  Lord of Cernay, Jean de Furet is wearing an iron suit and a coat of armor bearing his family’s coat of arms.  Bare-headed and his sword by his side, his feathered helmet is placed by his left foot.  His wife is wearing a simple dress under a long cloak which covers her head.

As you leave the church, you will notice the fortified bell tower of sandstone, with its arrow slits for defense.  Inside, a spiral staircase leads up to the clock and the bells

The church is open every day, welcoming visitors, and each Saturday evening, the faithful attend mass at 18:30.

Every morning, noon and evening, the Angelus rings three times, reminding the villagers of the message of the angel Gabriel to the Virgin Mary, announcing the coming of the savior Jesus, and recalling Mary’s willing acceptance to become the mother of God made Man and thus enabling us all to share in HIs Eternal life. 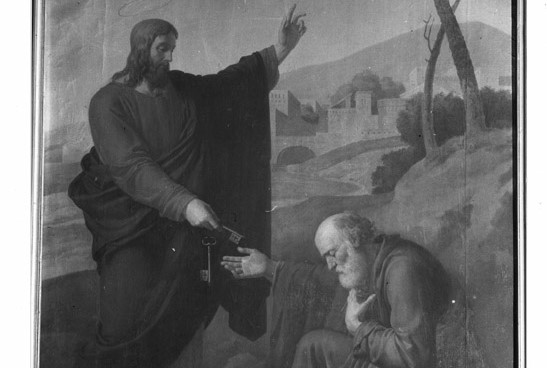